In the project, you can run these commands:

Running this script will start the service and automatically open the default browser to display your page. When you re-edit the code, the page will automatically refresh.

Running this script will compile your project. You can find the compiled file for deployment in the dist directory of your project.

The compiled file is compressed. If you want to know more detailed information, please refer to build.

If you need to deploy, check out deploy. 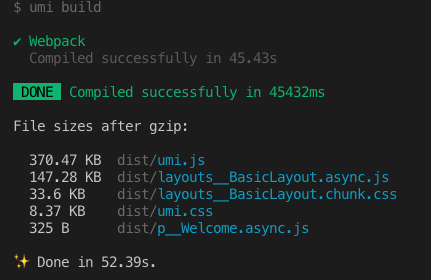 The analysis script does the same thing as the build, but he opens a page to display your dependency information. If you need to optimize performance and package size, you need it.

We have provided a series of lint scripts, including TypeScript, less, css, md files. You can use this script to see what's wrong with your code. In the submission we automatically run the relevant lint.

This script will automatically fix some lint errors. If you are ruined by lint, try it.

This script will perform a series of tests, including e2e testing. For details, see test.

fetch: blocks may be too slow. If you are just looking at the demo, it is recommended to use the complete mode in yarn create umi

This script will try to delete all the i18n code in the project, which is not good for complex runtime code.